Another wonderful example of the Conservatives’ partisan political use of public resources is provided by a recent news release put out by the Office of the Minister of Veterans Affairs on Thursday, January 15, 2015.  This news release also had a local Port Moody-Coquitlam angle hence why it is being addressed and discussed here.

The news release, which is reproduced below, describes a meeting that took place on Thursday, January 15, 2015 between the new Minister of Veterans Affairs Erin O’Toole and various veterans stakeholder groups in Vancouver.  So far so good you say.  What’s wrong with that?  Well, what is notable about the release is that its focus, both in the photo provided and in the accompanying text, is exclusively on Tim Laidler of the Veterans Transition Network and the Minister of Veterans Affairs Erin O’Toole at the expense of all the other groups and participants (who remain nameless in the text and faceless in the accompanying photo).  What is notable about this, for those of you who may not be aware, is that Mr. Laidler is the Conservative candidate for the riding of Port Moody-Coquitlam in the suburbs of Vancouver and is a staunch supporter of the Conservatives handling of Veterans Issues and of Former Minister Julian Fantino going so far as to suggest that complaints about Veterans’ treatments were “coming from a vocal minority and, in some cases, from partisan groups”.   So stepping back for a moment what you have is a sitting Conservative minister and a would-be Conservative minister sympathetically portrayed and featured at the expense of all the other nameless and apparently faceless participants at the meeting without any acknowledgement or disclosure of Mr. Laidler’s ties to the Conservative party.  What this is of course is the shameless promotion of two Conservatives and the whitewashing of the recent problems at the Ministry of Veterans Affairs, all on the public’s dime.  There may have been a time when such a blatant use of the public trough and resources would have at least been toned down voluntarily out of respect for the integrity of public office, but those days seem long gone now and all pretense of non-partisanship has seemingly gone out the window.  Any hint of partisanship in the news release could have been avoided by the equal promotion of all the other groups and the equal promotion of all of the other participants and groups at the meeting but that clearly was not the intention here.  It must be acknowledged it would be ridiculous to suggest that Mr. Laidler had anything to do with or could have influenced the content of a news release from the Office of the Minister of Veterans Affairs.  This is definitely the handy work of someone in Media Relations in the Office of the Minister of Veterans Affairs (as suggested by the source byline at the bottom of the release).

What is really unfortunate here is that the overt partisanship displayed within the news release detracts from the true message that the participants at the meeting are trying to convey: that they are all working together with the common goal towards helping veterans and addressing veterans’ concerns. Instead, intentionally or not, the news release relegates Veterans’ concerns to a political tool that can be exploited for both personal and party gain. Very sad that it has come to this.  I guess an election can’t be too far around the corner after all. 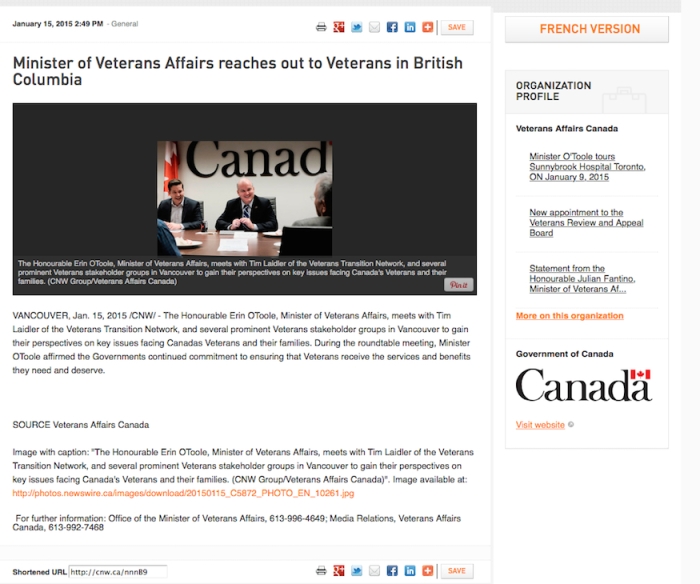 8 thoughts on “All On the Public’s Dime”

Link to the ABC (Anyone But Conservatives) Veterans 2015 Campaign